Use Systems for Step-by-Step Success

Use Systems for Step-by-Step Success 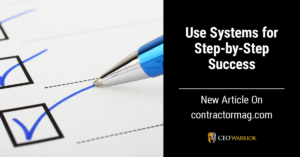 What if I told you that there was a strategy that most Contractors are overlooking right now but which could have a profound effect on any business that implements it… by increasing revenue, decreasing expenses, making life so much easier for the Contractor… oh, and it doesn’t cost a penny.

Most people would be skeptical but I’m going to share it with you in this article—step by step by step with NO catch or trick. You’ll be able to implement this profound game-changer by the end of the article.

The secret is: Systems. Not just software systems (which is what a lot of people think about when they hear the word “systems”) but just a step-by-step process—perhaps a checklist, a habit, or a procedure.

Want to know what makes many McDonald’s Restaurants so successful? It’s their systems. They have a step-by-step plan for everything in their store from the moment they turn the lights on in the morning to the moment they lock up the doors and leave at night.

but people are still blindly following it anyway.”

The difference between big, successful, profitable, growing companies and small, struggling, unprofitable, stagnant companies is: systems. (Sure, there might be other factors involved but systems are the “X-factor” that can give a business a quantum leap to a higher level.)

Contractors who want to grow their businesses could invest more in things like marketing and lead generation or fancier equipment for their techs but you’ll be able to squeeze out so much more success from what you already have when you build systems for your company.

No matter where your business is now, no matter how you want to grow, and no matter what problems you’re facing in your business today, a system is the no-cost, simple-to-implement strategy to fix and grow your company.

The Qualities of A Great System

A great system for Contractors is any system that is pre-planned, consistently performed, and regularly reviewed.

Pre-planned: A pre-planned system is one that has been intentionally built by design to ensure that all the parts of the system are performed as needed. One of the best ways to figure out what system to build in your company is to look at the problems, frustrations, and stresses that people face in your company and build systems around them.

When and How to Build a System

Want to get more done in your company and reduce errors and screw-ups? Build a system. 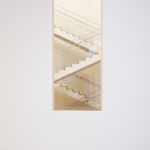 Step 1. Start by identifying the biggest headache or struggle in your company. For example, maybe your teams aren’t returning equipment into the warehouse at the end of the day or maybe they’re not reviewing the dates and amounts when customers write checks.

Step 3. Then, build the steps so that the actions you want them to take are clear and obvious, and perhaps they can’t move forward until they have completed the steps they were supposed to do. For example, for the missing equipment, create a warehouse check-out/check-in form that your warehouse team must sign-off on when your tech submits the paperwork; or, for the sloppy check reviews, create a checklist of the parts of the check they must review, and each box of the checklist must be initialed by the tech as they complete that step of reviewing the check.

Step 4. Implement the system by introducing the system to your team and telling them why it is being implemented. Help your team understand why it needs to be done (and, better yet, show them how complying with the system is in their best interest).

Step 5. Regularly review the system to make sure it is still working. Tweak it slightly if it has not solved the situation completely, or if changes in your company remove the need for the system.

Building systems is simple, and the very best place to start is to build systems for the most pressing problems in your company.

Want to take your company to the next level? Encourage all team members to identify the top problems in their department and create systems to solve those problems. Make this a regular practice in your company. And, whenever you are feeling stressed or frustrated about a problem in your company, stop worrying and ask yourself: “How can I build a system that will solve this?”

The difference between an okay company and a really successful one is systems. The more systems a company has, the faster and more efficiently (and profitably) it will run. Start building systems in your company right now and see how much more successful you can be.

Don’t YOU want to be more influential, boost your expert status and play against the big companies?

Learn HOW at the Service Business Edge: The Secret Blueprint To Growing Your Business.