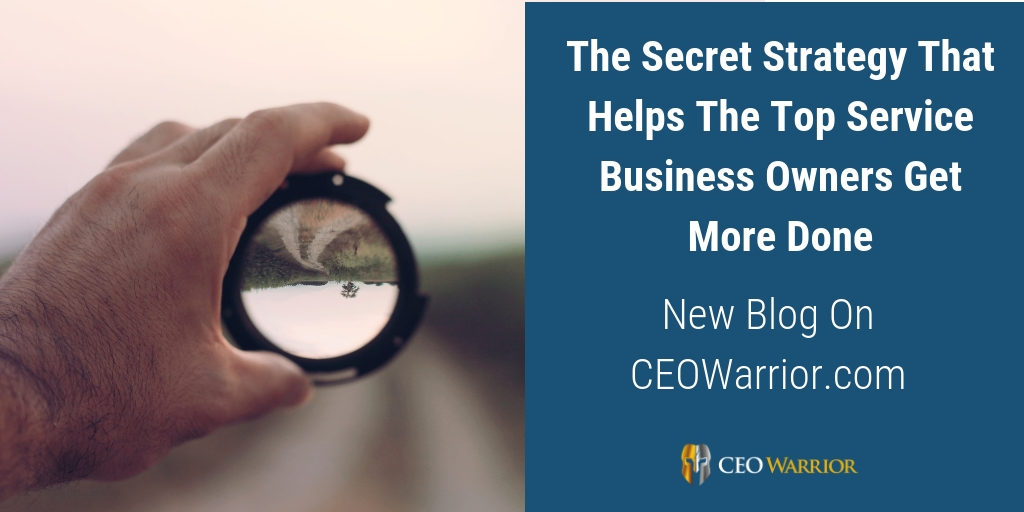 For the first 10 years that Rob and I owned our service business, we struggled. I’m sure you’ve heard the story. It was only when we almost had to shut things down that we decided to really fix things and turn things around. Then, in the (approximately) 13 years that followed, we grew by more than $1 million every year, eventually surpassing $30 million before we were acquired by a large private equity firm.

What was the difference between those first 10 years and the last 13 years and why were they so fundamentally different? You can point to many different things but there was one that really changed the game for us: Our focus.

Focus is committing and fixating on just one task at a time. That fixation is the key, and focus can be the difference between success and failure.

For Rob and I when we were turning our business around, the key to our success was our focus on growing our company: our survival depended on it and we became ultra-focused, fixated, and committed to that one outcome, and we realized that everything else was a distraction.

Problem is, as service business owners, it’s easy for us to have the opposite happen—to become distracted and overwhelmed by the many tasks we have to accomplish day-to-day. We look at our list of to-dos and it is SO LONG, so we jump from one to the next to the next. However, it’s not jumping from one thing to another that makes us successful.

Think back to the olden days when pioneers traveled by horse and wagon. Those pioneers wouldn’t just let the horses go wherever they want; they put pieces of leather over the horses’ eyes—those pieces of leather were called “blinders”. This was not to make them completely blind, but to direct their vision in one direction so the horse could only see directly in front of them. This was to focus them so they were not distracted from the one job they had. The horse had one task, to pull forward, and everything else was irrelevant to them doing their job well.

Service business owners need to approach their work with the same degree of focus. I am not talking about busy work or your daily tasks; rather, I am talking about the big ideas, the game changers, the core needs that your business has. Focus in on those things, study them, learn them, and attack them with the full intent to push or pull them forward to the next level.

How effective would you be in business, or in your life, if you focused only on the most important work before you at any given time?

It changes the game. Instead of getting caught up in the drama and petty demands of your office, you work only on the big picture items that can transform your company. Instead of looking at your WHOLE list to tasks and jumping from one to the next, instead, work only on the one or two things that will have the most impact and working ONLY on those.

Want one action step that will change the game for you and your business? (Try it for the rest of the month, see how it works for you, and then implement it for the rest of your life…) As Brian Tracy said when he was a guest speaker at Service Business Edge, “become addicted to task completion.” That’s how Rob and I turned around our business: we focused on projects and became addicted to completing the tasks that would complete the project.

Do this: Write down the one or two things that you need to focus on right now to move your business to the next level. Not just a single task but a project or strategy. Is it: hiring another team member? Getting your marketing dialed in? Improving your avatar? Then, commit to nothing else but that project for 2 weeks… and see what happens. Put on your blinders, block out all the other distractions, and work on this project for 2 weeks straight.

Here’s what will happen: you’ll hate it at first because so many other things will seem like they are ignored. (The good news is: someone in your company is probably taking care of it and you have been micromanaging for a while). If you’re really concerned then get someone else, like a manager or your second-in-command, to run the day while you work on this project.

Commit to this process 100% and stay on track. Do not get distracted by the other things around, just straight ahead focus.

When you see the needle move after 2 weeks of intensive focus, I think you’ll start to see the value of having laser-like focus and you’ll commit to doing this more.

(The rest of the story: after Rob and I had started our turnaround and were growing our service company, we ended up giving up our offices and the day-to-day running of the business so we could do this kind of thinking outside of the office. It was a MASSIVE step that dramatically improved things.)

Bonus tip: Extend this focus out into your personal life and not only your business will reach the next level, but all areas of your life as well!