Beat Out Competitors When a Prospect is Considering Multiple Estimates

Beat Out Competitors When a Prospect is Considering Multiple Estimates 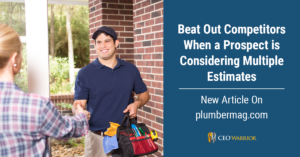 Has this ever happened to you: You go to a prospect’s home to look at a potential job. During the conversation, the prospect tells you that they are collecting multiple estimates and will get back to you.

It’s an effective tactic. The prospect doesn’t want you to get all “salesy” in their face, and they are afraid that you (and your competitors) will use pushy tactics. So they diffuse that threat with the multiple estimates approach, which also makes them feel like they are logically deciding based on the merits of each estimate. Problem is, you and I know different: Most prospects will look at each estimate based solely on price, likely because all the other parts are too confusing for them. If they are price sensitive, they’ll choose the lowest estimate; if they are less price sensitive, they’ll choose the middle estimate.

How can you influence that decision? What can you do to increase the likelihood that you’ll get the call, even if you happen to be the highest estimate?

Here are five strategies to help you win more jobs even if your prospect is collecting multiple estimates.

Strategy 1. Agree that the prospect is making a wise move.

When the prospect tells you that they are collecting multiple estimates, affirm that decision. That makes you their ally instead of appearing like someone who is inconvenienced by it. Never speak negatively about your competitors, either, but assure the prospect that you are confident your estimate will stack up well against anyone else they look for.

Strategy 2. Find out the prospect’s criteria for the work they need done.

The prospect already told you that they need certain work done — whether that’s plumbing a newly renovated bathroom, getting a new water heater, or some other service. But what will help you win more estimates is if you dig a bit deeper to understand the challenges they face if they don’t get a solution, as well as the value they get if they do: A new water heater, for example, doesn’t only have to mean “more hot water,” which is the basic answer; rather, a new water heater may mean “mom finally gets the hot shower she deserves even after all the teenagers have finished using the bathroom.” That is a much more tangible benefit and you can write that information on the estimate to reinforce your solution when you present it.

Think about the estimates that you or your competitors write for prospects. They might as well be written in a different language as far as the prospect is concerned. There are probably measurements and technical codes on your estimate that are completely foreign to the prospect. Of course you want to keep those items on the estimate, but your prospect can make an easier decision when they open an estimate and see a clearer list of value items. So it’s not just $229 for something they don’t understand; rather, it’s $229 for a “94-point water heater analysis, inspection, and diagnosis.” Make sure every item (or group of items) has a value-added name that the prospect will appreciate.

Prospects only say that they are collecting multiple estimates because they think it makes them wise consumers and protects them against fraudulent practices. However, all it really does is overwhelm them, and they really focus only on the bottom-line price in the end. You can help your prospects, and position yourself as an expert, if you help them make a decision.

Tell them, “I’m a homeowner myself and I also get multiple estimates for work around my house, and I know how challenging it can be to make a decision with more than one estimate. So what I did was draw up this simple chart that you can use to help you decide.”

Then hand them a chart that gives them a few criteria to weigh each estimate on. Even if doing this makes your estimate not the preferred one, you will still position yourself as a caring ally. It will make them feel like you have their best interests in mind even if it means you won’t win the business. It can actually have the opposite effect of convincing prospects to hire you.

Strategy 5. Add value after you leave.

You’ve left the estimate, you’ve shaken their hand, and you’ve left their house. Fortunately, you can still influence their decision-making by adding more value after the fact.

One powerful way is to record a short, personalized video that shows them how excited you are to get to work and gives them a tip or idea that demonstrates that you’ve been thinking about them. One example might be to record yourself in front of a stack of water heaters saying, “I just wanted to let you know how excited I am about serving you. In fact, this is the very water heater that I will install at your home. What I love about this water heater for your situation is …” Then speak about it for a few minutes. This helps to show how engaged you are. If you’re not sure what to record, then record some general tips and ideas to help them around their home.

In this industry, we plumbers encounter a lot of prospects who think they need to get multiple estimates. There’s nothing wrong with that, but it also tends to remove your ability to influence their decision to hire you. Fortunately, with these five strategies, you can stay in the game longer and increase your chances of winning more business — even if you’re stacked up against competitors in a multiple estimate situation.

Don’t YOU want to boost your expert status and play against the big companies?

Learn HOW at the Service Business Edge: The Secret Blueprint To Growing Your Business.